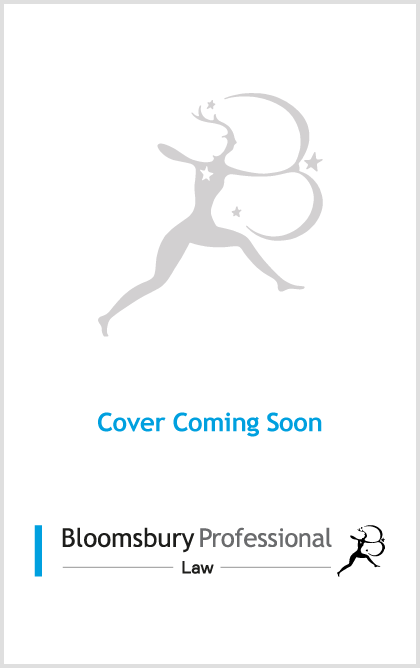 The Law of Assisted Reproduction

About The Law of Assisted Reproduction

There have been numerous developments since publication of the first edn in both case law and procedure, which will be fully examined, including the addition of several new chapters. The key developments are: Chapter 1-Introduction Inclusion of more tables and statistics, (updated), in this chapter regarding the numbers of treatment cycles, embryos used, live birth rates, costs of IVF etc. Chapter 5: Three Parent Children-Mitochondrial Donation This new chapter will... Read more

About The Law of Assisted Reproduction

There have been numerous developments since publication of the first edn in both case law and procedure, which will be fully examined, including the addition of several new chapters. The key developments are:

Chapter 5: Three Parent Children-Mitochondrial Donation
This new chapter will examine and evaluate the significance of, and potential safeguards contained, in the new Human Fertilisation and Embryology (Mitochondrial Donation) Regulations 2015, which was effective on 29 October 2015. These Regulations legalise the creation of so-called ‘three parent children’. The chapter will assess the subsequent decision of the HFE Authority on 15 December 2016 to effectively give the go ahead for the use of the new technique and furthermore consider the ramifications of the Authority’s subsequent decision on 16 March 2017 to grant the first UK mitochondrial donation licence to the Newcastle clinic. It will analyse and discuss the myriad range of legal, ethical, moral and medical issues surrounding the development and ‘roll-out’ of this new therapeutic technique, and articulate some of the many concerns of critics of this new assisted reproductive technique and the potential pitfalls.

Chapter 14: The Abortion Controversy
This chapter will assess and evaluate the current law on abortion in England and Wales.

Chapter 15: New Developments in Abortion
This new chapter will assess developments in both Northern Ireland and the Republic of Ireland concerning liberalising the existing abortion laws in both jurisdictions including:
In Northern Ireland the implications of the Sarah Ewart case on whether women in Northern Ireland should be able to access abortion in the province if their foetus suffers from fatal foetal abnormalities, or if the foetus has been conceived following rape or incest. The compatibility of existing N.Ireland laws governing abortion to ECHR articles. The High Court decision of 30 November 2015 and the NI Court of Appeal appeal from that decision on 29 June 2016. The vote and debate in the N.Ireland Assembly to uphold the current N.Ireland law on abortion. The Supreme Court decision of 14 July 2017 where the Supreme Court rejected an appeal by an anonymous mother and daughter that N.Ireland women should be able to access free NHS abortions. The decision of the government announcing that women from N.Ireland will in future be able to travel to GB and get free abortions will be assessed. The proposed amendment to the Republic of Ireland Constitution which gives the unborn child equal legal status and protection to the mother, (to be decided in a referendum on May 2018), will be evaluated and analysed and its significance and relevance to the law on abortion in the UK will be discussed.

Chapter 16: Naming but not Shaming?
New case law on who are the parents of children born from IVF will be evaluated and discussed. These include e.g. Re Z (A Child: Human Fertilisation and Embryology Act: Parental Order) – an application by a father for a parental order under s 54 of the 2008 Act that he was solely in law the father. The application was dismissed on the basis that such an order is not available to a sole parent.

Chapter 20: The Human Fertilisation and Embryology Act 1990-the Birth of the Human Fertilisation and Embryology Authority
The HFEA was one of the quangos targeted for culling by the Coalition government of 2010-15, but this has not happened as at 2018, albeit the membership of the authority has been reduced significantly-this will be considered and discussed.

Chapter 22: Ongoing Controversies or Descents down Ethical Slippery Slopes?
This new chapter will focus on a number of recent controversial issues and cases surrounding fertility treatments and embryonic research and use of embryos generally, including:
Re A and others (Human Fertilisation and Embryology Act) [2015] EWHC 2602 (Fam) where in seven assisted conception cases, directions were sought following the discovery that either fertility clinics had lost consent forms that had been validly completed or forms had been completed incorrectly thereby causing huge stress to parents casting doubt on whether they were the legal parents of the children born. This generated in scathing criticism of the fertility industry and its practices by the President of the Family Division, Sir James Munby. The case of the businessman suing a Harley Street clinic for £1 million after his ex-girlfriend allegedly forged his signature will be considered on 20/7/2017. The controversy of fertility clinics ‘exploiting’ women by paying them cash for eggs, and the ethics of egg sharing schemes, not informing patients of the true costs of IVF, and the glaring disparities between clinics concerning IVF treatment costs will be highlighted and discussed. The cases in 2016 where a widow wins a High Court case to keep frozen embryos and where another woman was allowed to use her dead daughter’s eggs in the USA will be evaluated.

Chapter 22: The Lottery of Accessing Assisted Reproduction
Further recent evidence and sources will be discussed and evaluated concerning the NHS IVF postcode lottery. Several CCGs refuse to fund even one IVF treatment cycle, several fund only one and several fund only two – blatantly disregarding NICE Guidelines

Key legislation and cases to be covered:

1. Introduction
Part 1-Human Admixed Embryos: New Eden or Manufactured Humanity?
2. Frankenstein Humanity-Promethean Hubris?
3. House of Lords Debate
4. House of Commons Debates
5. Three Parent Children-Mitochondrial Donation
Part 2 Saviour Siblings-Commodifying Life?
6. Saviour Siblings
7. Ethical Issues
8. House of Lords Debates
9. House of Commons Debates
10. New Beginnings-New Law?
Part 3 Welfare of the Child versus the Wishes or Whims of the Parents
11. Welfare of the Child in 2019
12. The Common Law Response: Case Law on the ‘Welfare of the Child’ and Suitability of Parents
13. House of Commons Debates
14. House of Lords Debates
Part 4 The Case for Abortion Reform
15. The Abortion Controversy
16. New Developments in Abortion In Northern Ireland
Part 5 Human Fertilisation and Embryology Act 2008-The New Order of Parents
17. The Birth of the New Parenthood Regime
18. Naming but not Shaming?
Part 6 The Impact of Human Rights
19. Human Rights and Reproductive Medicine
20. ECHR Square Pegs in Common Law Round Holes
Part 7 The Human Fertilisation and Embryology Authority-Fit for Purpose in 2019?
21. Warnock: The Ethical Compass
22. The Human Fertilisation and Embryology Act 1990-the Birth of the Human Fertilisation and Embryology Authority
23. Changes to the HFEA following the 2008 Act
24. Ongoing Controversies or Descents down Ethical Slippery Slopes?
Part 8 The Lottery of Certain Lives
25. The Lottery of Accessing Assisted Reproduction
Part 9 Randomness Rejected?
26. Sex Selection under the Human Fertilisation and Embryology Act 2008
Part 10 In Search of the Best Ethical Compass
27. The Role of Parliament: Our Ethical Compass
28. The View of the House of Lords
29. The Case for an Alternative Ethical Forum
30. Stem Cell Research in the United States: the Ethical Civil War Battlelines Redrawn?
31. European Union and Research on Embryonic Stem Cells-the Door Closes?
Conclusions